DOMA is Unconstitutional, Now What?

When the U.S. Supreme Court handed down their ruling last Wednesday, striking section 3 from the Defense of Marriage Act (DOMA) as unconstitutional, the Court radically changed the estate planning laws for many same-sex married couples. Not only are marriages of same-sex couples is now recognized as legal under federal law, but they can now take advantage of the thousands of laws and regulations that create tax exemptions for married couples. 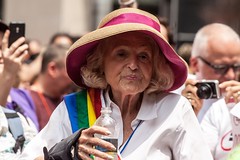 As explained in this recent article, one of the biggest estate benefits to come from the recognition of same-sex couples is the ability to transfer as much assets as they wish to each other, either during life or death, without having to pay any federal estate or gift tax. Prior to this 5-4 ruling from the Supreme Court, this tax benefit was unavailable for same-sex couples because section 3 of DOMA defined marriage as a “legal union between one man and one woman,” and spouse as “a person of the opposite sex who is a husband or a wife.” However, with the repeal of DOMA, same-sex married couples may finally be treated with equality and invoke this tax benefit as well as many others.

Another estate tax benefit that is now available to same-sex married couples is that of portability which was part of the 2010 tax law changes. This concept allows the surviving spouse to use the unused estate tax exclusion, which is currently $5.25 million, upon the passing of the spouse as their own. To utilize this benefit, the executor handling the estate of the deceased spouse need to elect on the estate tax return to “port” the unused exclusion to the surviving spouse, who may then use the remaining credits.

Another important estate planning benefit now available to same-sex couples is gift-splitting. Currently, individuals are allowed to give away $14,000 a year to as many people as they want without reporting the gift or paying a gift tax. There are three ways married couples can “gift split”: (1) each spouse may give $14,000; (2) the spouses may collectively give $28,000 from a joint account; or (3) a single spouse may combine the gift exemption and give $28,000 from his or her own account.

This new ruling also impacts company retirement plans, rollover rights for retirement accounts and other IRA accounts.  Same-sex married couples have access to the Employee Retirement Income Security Act of 1974, which gives your spouse the right to be the sole primary beneficiary to qualified retirement plans. Also, special rights are created for all retirement plans including IRAs that allow the spouse to rollover the account and defer taking withdrawals until the surviving spouse reaches the age of 70½, rather than immediately taking withdrawals by December 31st of the same year.

Whenever a new law is enacted, it’s important to seek advice from an experienced estate planning attorney who stays on top of these changes to update your estate plan is up to date and correctly reflects both your intent as well as the changes in the law.